It’s Rethinking UX day, the workshop that will determine the final mark of my Q1 together with iolce project.

By the way, if you want to have a look on the iolce project, I’ll have a link waiting for you way down near the footer.

Monday 17th December, like most workshops Mr.Bourgaux makes a slide presentation as an opening ceremony. Basically, the most important things that I recall are :

As the presentation came to an end, we had to independently select our group members. I filled in a group of 3 first year students., since we are forced to at least have one 2.5 year student (= repeats his year)in every work-group. With me in this working group the condition are met.

This is the workshop room, with all the students that take part in this project. In the end of the video, you can see my working groups table.

As you probably saw in the main page of the RUX project my group members are : Lua; Arnaud and Raffaele. As I was the more experienced in the WG, I allowed myself to take the lead on this project.

I started by asking them if they have understood what is being demanded by our teachers.They seemed unsure, so I told them about how things work since there is no change towards this project compared to last year. Except the apps that can be chosen are no longer the same as last year.

The past becomes motivation !

Last year I had Instagram as app for my rux project with my working group : Stephanie; Shamsuddin and Logan. I know for a fact that our project was not great, since every single one of us is repeating his or her year again... But I really am glad to have been able to work with them, because it was a pleasant time and I found we did well for what we knew at that point in time.

Photos of my working group from last year.

I am sure that this year is also going to be that great or even more because I’m not repeating anything ever again. At least in school that is.

First off all, we had to choose an app. This was pretty easy since we all seem to have some kind of similarity when it comes to food and finding a service like Uber Eats somewhat useful.

So Uber Eats is our choice, but what is Uber Eats exactly and what is its main goal & function ? These are the questions we asked ourselves and wrote down on our google docs. We did this part at first individually and afterwards gathered our intel.

Now that we defined what Uber Eats is, let’s tear down Uber Eats and rebuild it, to see how the app is built. What I mean by that? It’s simple : my WG and I opened the Uber Eats app on our phones and desktops and listed every single functionality there was. Every of these functionalities are written down on some paper cards that I had prepared. Once every functionality was identified, we created a side map with those cards.

At that point in time, we decided who is going to pick which functionality. My choice was “composing a menu” function. Why? Because I was already seeing ways to improve it without even having tested the app yet.

The next step is to fully understand the main functionality of this app. Uber Eats main function is to deliver food to people's desired location. Therefore, each one of us had to browse through the app and take screenshots of every step we came by, so we can reproduce a scenario. Especially, if there are some strange bugs or problems going on. This allows us to identify key problems that have to solved.

User senario of Uber Easts. Click on the image to view the slides.

Everyone of us had to create this slide show individually. I thought of using google slides for this instead of Photoshop or InDesign, because I wanted to change for once. Since I never used Google Slides that much, it was a good time to learn something newer. I didn’t finish this at school, since the heating at school was not working and I was better off working at home. Either way, it wouldn’t have made much difference if I stayed or not, since this part of the job is individual.

On the next day, Tuesday 18th of December, we started by checking the briefing. We already made most of the team required tasks like defining what Uber Eats is, explaining the rux project, listing the functionalities. What was missing, was the member presentation. However we didn’t notice that till Friday morning of the same week.

We spend most of day the discussing about this and that, to help each other out. Like for instance, yesterday, on the first day of rux, I decided to go a step further in my testing by really testing Uber Eats for real and spending my hard earned bugs for my school project. Anyway, it wasn’t a big sacrifice since my belly was taking advantage of it as well.

Therefore, I was able to share my experience of my delivery. On that day, I used the moment to make plenty of screenshots of nearly every step. On our Google Drive, I shared all my screens with them and pictures that I had taken of us working.

The heating was still not working and that isn’t the case on either day. My feet were freezing, it really was one of the hardest Workshops since the work environment was very cold. I hate to work with my jacket on but on that day, I preferred this too freezing.

We continued working on our individual jobs and nobody was leaving because we didn’t like to leave before 3pm when it’s workshop day even if we don’t have collective work to do. I personally was preparing my paper prototype and I had already figured out what I wanted to improve.

My Testing on Best Fried Chicken was somewhat responsible for it(order of Monday evening). It allowed me to see what I liked and disliked on the app, to get my food to my home here in Belgium. By the way, the bucket mix of BFC really is damn delicious. I’m sorry but when you learn to love food that much, your belly starts talking by itself. 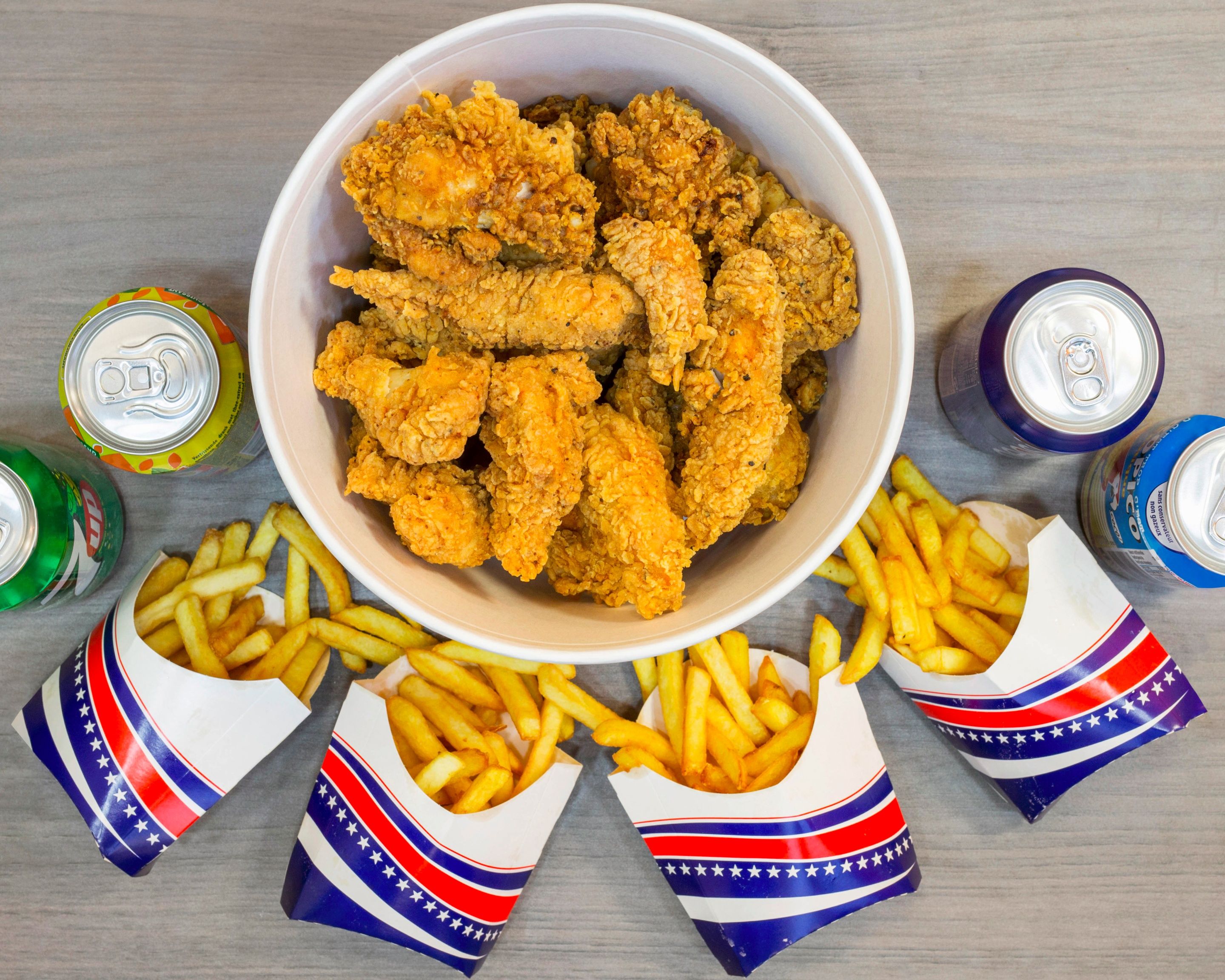 I get hungry just looking at it ! However this is the Bucket mix from bfc.

Fun aside for the moment, I had prepared some paper cards that I used to draw my idea of improving the menu selection and I went a step further of replacing “schedule order” to a better location like in the basket. Why the extra step? Even if this step took me some screens more to draw, I felt like this was necessary, because this functionality can be really useful. Placing it in the home screen on the top left just didn’t made sense to me. Placing it in the basket will probably make it much more useful for people that want to preorder.

Of course, I didn’t start my prototype without knowing what the task of my users is going to be.

Their task is the following:

Order 2 Mc Menu McChicken for Friday 21 December at around 7.20pm; medium size both; Fries in one menu Salad on the other; Coca-Cola Zero for one and Sprite for the other + 2 Mayonnaise and finally verify your order and confirm.

See the testers in action. Visualze the issues yourself too. French is spoken no subtitles.

Many thanks to you my dear reader. Enjoy the rest of the case study.

Tap on As soon as possible.

Scroll Down to sauces. And select mayo.

Go to the Drinks, scrolling down.

Reminder telling that the user is not juged.

discription of task (in French)

To show my user tester my gratitude, I prepared a paper bag filled with chocolate inside.

Wednesday 19th we had a break of the workshop, so I gladly took this time to finish my prototype because those take a lot of time since I drew them with much details.

I arrived at school on the next day and did a pretesting of my prototype on my WG - members and rewarded them with a chocolate as well for helping me. Then, I felt confident enough to search for a student, that I don’t know, to test both the real app and my improved paper app. Both apps have the same task of course. This means the user will have to agree on both. Why? Well because this way my user will have a way better understanding of why I chose to make those improvements. This way, the user will also know if in his or her opinion these changes are necessary.

I managed to do 6 user tests that day, of which 3 were teachers and 3 were random students. If I count my pretesting in, than that makes 9 user tests.

This felt like a successful day because my prototype seemed to have made a good impact and I don’t have much to change. I just must reproduce the prototype clean on illustrator images and I will most likely use adobe XD for the prototyping itself.

I worked until late that night, beacause I wanted the pictures finished in order to ask Mr. Marchal, our Design teacher, for advice.That morning, I went directly to him and he basically told me that I must review the font and the color of it. He also told me to read an article to improve my web design work on illustrator. I found it useful and I wanted to share it with you too. You'll find it in the footer.

That morning on Friday 21th of December, and like most of us probably, I had a problem. That problem was, that I had still not found presents for my loved ones. I had to finish earlier so I could somehow manage to find something for everyone and return to Luxemburg. I was grateful for my group members for having accepted my absence for that day.

And here I am writing my Case Study, so that you are able to experience this work with me. By the way, I managed to find a present for every single one and on top of that they were all very happy so this was a very nice ending of 2018. I got spoiled as well and like every end of the year I’m very grateful for what I have and those I have around me.

Best wishes to you !

You my dear readers, I hope you enjoyed this resume of my work and I wish you all a happy 2019. Wish me luck on my presentation day !